Our teams are happy to welcome you safely

and in accordance with the new visit methodes presented on this following page.

⚠ The presentation of a health pass or a negative PCR or antigen test from less than 48 hours will be mandatory to access the monument for all persons from 18 years old. 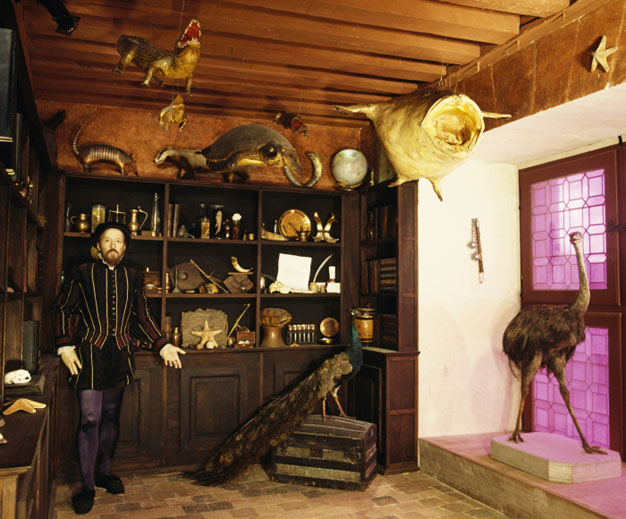 Guillaume Gouffier, lord of the powerful Bonnivet line that had been established in Poitou since the 16th century, was singled out by Louis XVII. He granted him his protection, enabling him to acquire several noble titles and estates in Poitou (including Oiron) and in the Roanne region. His two sons, Artus and Guillaume, subsequently enjoyed privileged positions within the court. Artus followed Louis XVII to Italy, and received the “government” of the young Francis of Angouleme. After becoming Francis I of France, he made Artus Grand Master of the royal household. Guillaume, an Admiral, died on the battlefield after Francis I was captured in Pavia in 1525.

The era of prestige

Claude Gouffier, son of Artus and Hélène de Hangest, spent his entire career in service to the king and the court. In 1535, the monarch appointed him First Gentleman of the King's Bedchamber. In 1545, Claude was then designated captain of the 100 gentlemen of the king’s household, responsible for escorting and protecting the monarch. Finally, in 1546, he was appointed to the prestigious office of Grand Equerry of France. It was a position of great responsibility, and the role involved carrying the king’s insignias during official ceremonies. It also included responsibility for managing the king’s stables (riding school, armoury and organising jousts).  He was also one of the leading collectors and art-lovers of his time. His fabulous wealth, due primarily to the vast land acquisitions made by his grandfather Guillaume and his father Artus, through royal donations, marriages or purchases, enabled him to build up a vast collection that included paintings by Raphael, Jules Romains and Pietro Perugino, including the portrait of John II of France (now in the Louvre), tapestries, leather drapes, illuminated books and silverware. It was the Count of Caravas that Charles Perrault immortalised in Puss in Boots under the pseudonym of the Marquis of Carabas.

Upon his death in December 1570, the Gouffiers lost their privileged position in the Valois court. By the early 17th century, with the court now permanently located at Versailles, they had become little more than a powerful provincial family. Louis Gouffier, Claude’s grandson, was both the last of the “great” family members and the man who triggered the family’s fall from grace. As the Governor of Poitiers and State Counsellor in 1619, made a Duke and peer of France one year later, he opposed Richelieu, who exiled him to Oiron. It was he who added the reception apartments, ornate façades and rich interior décor to the château. The last member of the Gouffier “dynasty” to live permanently at Oiron was Louis’ grandson, Artus. A close friend of philosopher Blaise Pascal, he withdrew from public life in 1667 and donated the château and his title to his sister, Charlotte, the last person to bear the family name. Her husband, François d’Aubusson, Marquis of La Feuillade, resumed the work.